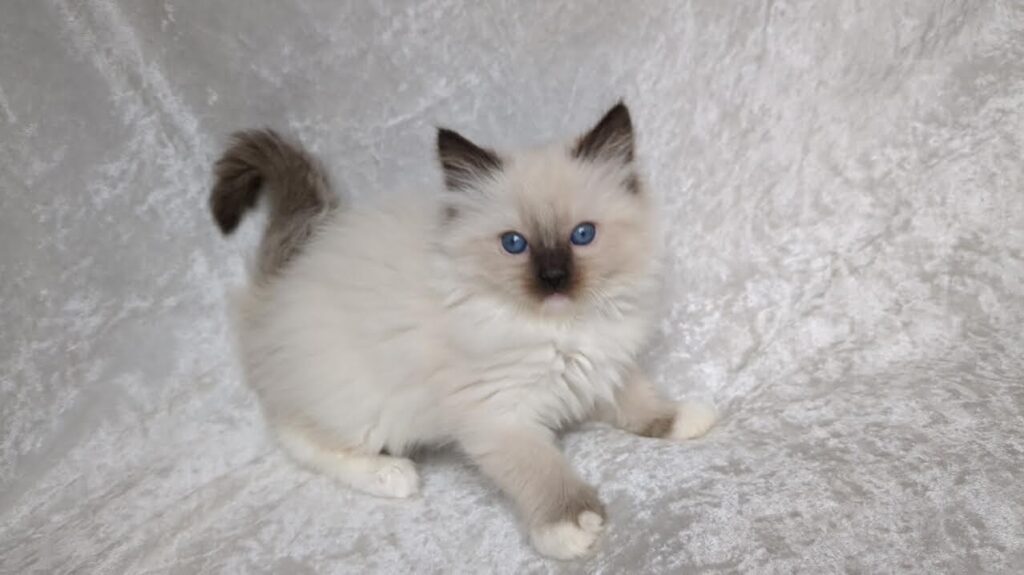 Raising quality TICA-registered Ragdoll kittens in our home. Since 2003. 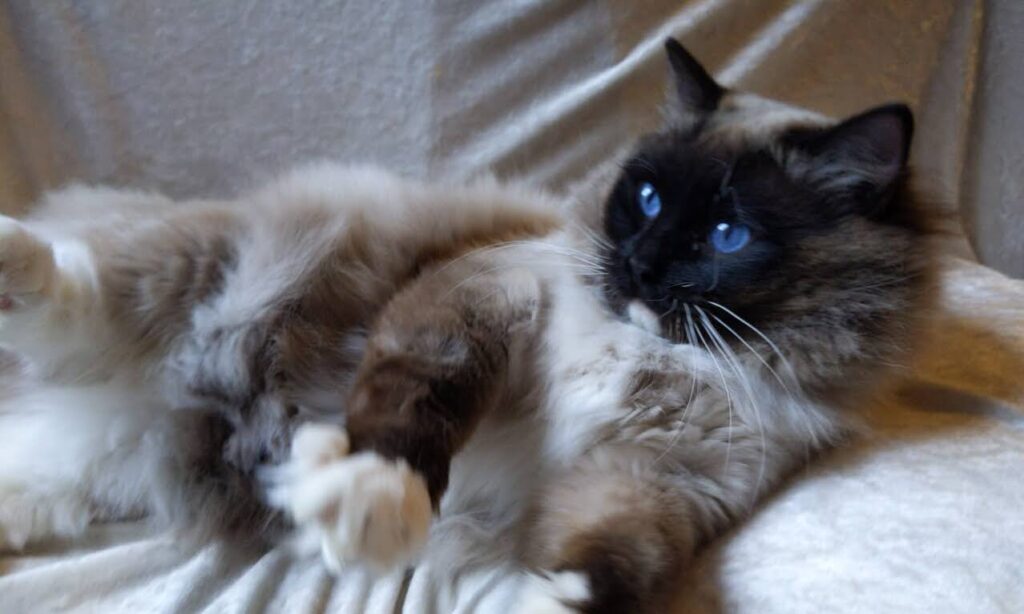 Introduction:
Ragdoll cats are loving and gentle in disposition, and very people-oriented.  They are one of the largest domestic cat breeds with medium-long, very soft, rabbit-like fur which is low-shedding and which does not tend to mat.  Ragdolls are “pointed” in color (like Siamese; with darker face, ears, legs and tail).  A Colorpoint Ragdoll does not have a white pattern overlaying the pointed coloring; a Mitted has white mittens, boots, bib and chin (sometimes with a blaze), and a Bicolor has all white legs, chest, and belly, with an inverted “V” of white on his face.

Ragdoll Purrsonality!
“Ragdolls”  are so named because they tend to relax when held, and may go completely limp “like a ragdoll”.   They become very attached to their people and also enjoy the company of other animals, especially other Ragdolls!  Ragdolls have been called “puppy-cats” because of  they are often very puppy-like in their devotion to their human companions.  Your Ragdoll may follow you around the house, may want to sit in your lap or beside you when you sit down, or may greet your guests at the door!  In the show ring, Ragdolls are often quite an attraction  as they sweetly accept (and even seem to enjoy!) the judge holding them like a baby, or placing them on their backs, etc.   Even though they may have a docile personality, Ragdoll cats still love to play with a variety of toys–especially if you are playing too!

Ragdoll History!
Ragdolls have a very colorful and somewhat mysterious history.  The breed began in Riverside, California in the early 1960’s when a woman named Ann Baker noticed her neighbors’ longhaired white cat Josephine tended to have unusual kittens.  Many of Josephine’s kittens had big blue eyes, semi-longhaired fur which was easy to groom, large size, and a very loving disposition.  (Ann later stated that Josephine’s kittens were only unusual after Josephine was hit by a car and subsequently taken to a government facility where her DNA was altered.  After the “genetic alteration”, Josephine’s progeny were unusually large, had non-matting long fur, went limp when picked up, and were “impervious to pain”, according to Ann. )

Ann Baker then began the breed by breeding Josephine to a Birman or Birman-like male which showed the “pointed” coloring and at some point it is said that she introduced a female which resembled a Burmese (also a pointed cat) into the breeding program.  This combination resulted in the Ragdoll breed, named by Ann because of the breed’s tendency to go limp when picked up.  Ragdolls were first officially registered in 1965.  Many other breeders have worked since then to standardize and perfect the breed, and Ragdolls are now serious contenders in the show ring in all the major cat associations.

Physical Description:
Ragdolls are medium-large to large breed. They are slow-maturing, and may not reach full size and weight, coloring, or fur quality until approximately two to three years of age.  Males weigh an average of 12-16 pounds as adults, and neutered males may occasionally grow even larger.  Females’ average weight is around 10-13 pounds at full size.  A Ragdoll cat’s  neck, chest, and hindquarters are heavy and strong.  The Ragdoll should give an overall impression of “subdued power”, according to the TICA standard.

Ragdoll cats have a gentle, sweet expression and large oval blue eyes.  A Ragdoll’s head should be broad and wedge-shaped, and medium ears should be rounded at the tips with a slight forward tilt.  Ragdolls have a gently curving profile, which should be neither pointed (like a siamese) nor flattened (like  a persian).

A Ragdoll has medium-long, silky and plush rabbit-like fur and a full, bushy tail.  In general, Ragdolls will have longer fur around the neck (a “ruff” or “mane”), and behind the hindquarters (sometimes referred to as “britches”).  Paws are large and often tufted with longer fur as well.

Ragdolls are “pointed” cats, like the familiar Siamese and Himalayan.  As with all pointed breeds, traditional Ragdoll kittens are born pure white and begin to develop faint color within a week or two.  Colors will continue to deepen as the cat grows older, and a Ragdoll will not show his full adult coloring for perhaps 2-4 years.

Care and Training:
Ragdolls are highly intelligent and like to please their caregivers. They can be easily trained to use a scratching post instead of scratching furniture, for instance, with praise and affection.  Some will even learn to fetch toys and bring them back!

Ragdoll cats do not shed as much as other long-haired breeds, and they require little grooming.  Ragdolls only need to be brushed occasionally because their soft, silky fur does not tend to mat.  Because of their low-maintenance coats, Ragdoll cats are ideal companions for those who like the look of the long-haired breeds but do not have time for the constant grooming required by Persians and others.   Most Ragdolls enjoy being brushed, however, and regular brushing or combing will only further reduce shedding.

Because Ragdoll cats are non-aggressive and may not even defend themselves if attacked, they should be kept as indoor cats only.  They do like screened porches or large screened windows, however, where they can enjoy fresh air and sunshine without being exposed to danger from cars, theft, aggressive cats or humans , other animals, or disease.  Some Ragdoll owners train their cats to walk on a leash (with a cat harness), although this may still expose your Ragdoll to diseases carried by free-roaming cats.

Your Ragdoll should be fed a high-quality (“premium”) dry food, with wet food each day (or better yet, exclusively wet food), and should have access to fresh water at all times.   We recommend a balanced real-meat or no-grain diet, as this is the optimal diet for cats.  A cat water fountain is recommended to encourage adequate hydration.  Please spend some time on catinfo.org for the real scoop on feline diet, from a top feline-only veterinarian.

Most importantly, Ragdoll cats need love and affection!  If you will be working long hours away from home, you may want to consider providing a “friend” to keep your Ragdoll company while you are gone…another Ragdoll is best (it has been said, “Ragdolls are addictive; you can’t stop with just one!”), although Ragdolls usually adapt well to living with another breed of cat, or even with a dog.